If you are going to buy an new iphone NOT on a contract, buy it through the apple store. It will come unlocked and you can put any sim card or provider in the phone which comes in very handy if travel

It's entirely relevant to helicopter operations if it makes it easier for us guys to do our job.   Phil 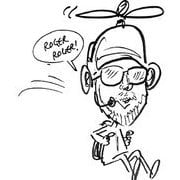 I switched to a Galaxy Nexus (Android 4.0) after using an iPhone 3G and then an iPhone 4. I needed to switch carriers to someone with better rural coverage, and the unlocked aspect of the "Google" ne